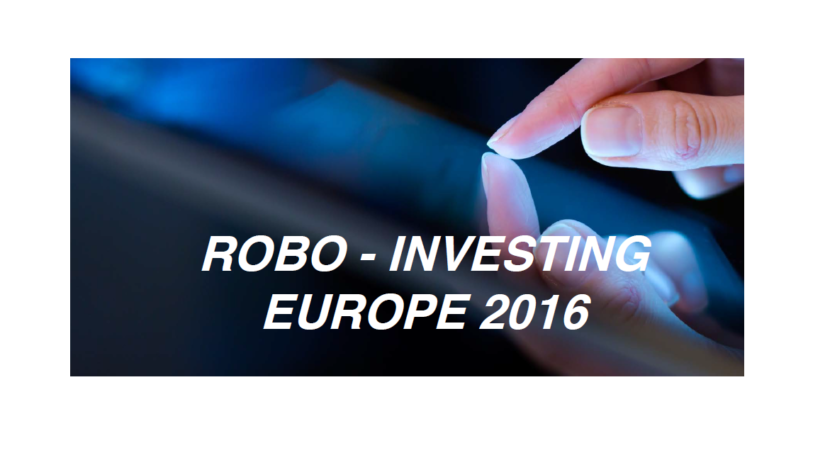 Over 250 delegates packed into Canary Wharf’s Level 39 on 25th May to attend Robo-Investing Europe 2016 – the first conference in the UK dedicated to robo-advice and digital wealth management.

The audience of entrepreneurs and representatives from all aspects of the investment community came together to hear 36 speakers and panellists considering how state-of-the-art technology is expected to impact the wealth management business and  help to plug the advice gap created by RDR.

Following Adizah Tejani’s introduction to the Level 39 – Europe’s largest technology accelerator space for finance – Andrew Power of Deloitte (below) and Rohit Krishnan of Mc Kinsey introduced what is one of the most eagerly anticipated developments in financial services – the development of automated advice platforms and the march towards Artificial Intelligence.

Mr Power said that a unique set of technological, regulatory and consumer circumstances have conspired to create interest in the opportunity like never before and that the industry was currently at an inflection point.

Power said that robo represented a disruptive technology but as an enabler rather than a replacement for advisers who would still have a role to play in a multi-channel world of financial advice.

He said that robo would benefit from current customer dissatisfaction and that companies incumbent in the space, thereby enjoying a considerable advantage, would come to the party because there was money to be made.

Technology and data resources are there to support this revolution and, unusually, the regulator is removing potential barriers to its development because RDR has left millions of people unable to access financial advice.

Faced with the high cost of advice or unwanted by advisers because they have less than £50k of investable assets, the potential for robo-advice seems huge; a well designed robo-advice platform is convenient, less intrusive and less scary that a traditional adviser (albeit without the Hob-Nobs) and creates an audit trail that satisfies the regulator.

Of the 5.4m in the advice gap that say they would pay for advice if it were cheaper, 2m are considered ‘tech-savvy investors’; it is not unrealistic to believe that 1m of these may use a robo-adviser in isolation.

In total eight different iterations of robo-advice were identified according to their sponsor and route to market, ranging from stand-alone brands that are being created such as Nutmeg and Wealthify through to private banks.

It is also believed that robo-advice will be an attractive alternative to default funds for the auto enrolled.

Rohit Krishnan revealed that he had been instrumental in one of the earliest forms of robo-adviser, an algorithmic trading platform, and said that a number of hedge funds were known to favour them to take human frailty out of trading decisions.

Describing robo as the ‘next generation of wealth management’ Krishnan said that its advantages of accessibility, cost and transparency weighed against the core benefits of traditional advice – human contact, deeper understanding and shifting market trends.

With just $20b under management, at around $100m p.a. the robo industry does not yet generate sufficient fees  to really be able to stand alone; plenty of VC cash has been invested but it needs the sleeping giants – banks and institutions with huge reach – to join the fray.

‘next generation of wealth management’

The cost of customer acquisition was a recurring theme, with no one willing to definitively declare what they pay, but the problem was highlighted with figures from a US platform which was spending between $300 – $1,000 per client, but receiving just $50 p.a. in revenue and lifetime income of $250.

Next was a panel discussion with representatives of robo-advisers all over Europe – Money Farm, Scalable Capital, Yomoni, Indexa and Moneybox – where we learned that the moniker ‘digital investment manager’ was preferred to robo-adviser.

Adam French (below) told us that Scalable Capital was unique in offering optimised risk profiling; Unai Ansejo Barra described the differences in Spain where advice traditionally comes from banks and clients are not given direct access to investments such as ETFs.

Much discussion was had around customer acquisition and the need to build trust, without leaving the impression that anyone had yet cracked it.

Mourtaza Asad-Syed said that the key to customer acquisition was recommendation whilst Ben Stanway said that Moneybox was targeting tech-savvy Millennials with an app that allows them to sweep small amounts of money into an ISA.

All agreed that it was important to manage clients’ expectations when it came down to investment returns and to be honest about performance during periods of poor stock market performance.

It was suggested that robo-advice may disrupt the asset management business rather than the adviser space, where the new platforms may power a whole new generation of advisers.

It is considered that there is great potential for existing execution only brokers to layer on robo-advice to deepen their offering and reach out into the orphaned client space.

Next up was an informative session regarding the integration of robo-technology and the importance of APIs.

Paul Resnik (below) of Finametrica described the considerable experience he has in integrating platforms and Alex Kerry explained how Winterflood has broken the mould in support for such platforms by allowing fractional shares to be settled.

We heard how ETFs are deeply ingrained in the retail investment ecosystem in the States where the split between retail and institutional sales is 50/50, whereas in the UK just 5% of ETF trades are retail.

Patrick Mattar (below) of Blackrock made the case for bypassing the robo-advisers altogether and relying on a single trade in an instrument such as MSCI Global Equities ETF – 1608 constituents, across ten time zones for just £25 a share; 60 funds worldwide now have more than £1b invested.

The new breed certainly has an attractive target market – Mass Affluents worldwide have $10 trillion of assets.

Robert Barnes told us of the benefits of a multilateral trading facility that spans 19 countries and delivers cheap and efficient trading solutions; he invited those considering offering robo-advice to come up with ideas as to how they could work together with Turquoise.

Serving a population that is growing and growing older, Mr Barnes highlighted the challenge of making investing interactive and interesting; however real the perceived need, making investing a ‘consumer product’ is the challenge faced by all of those seeking to create a brand in the space and the difficulty of that should not be underestimated.

The next panel consisted of those that deliver the products – predominantly ETFs – that underpin the new breed of platforms.

All agreed that robo is changing the investment landscape and that banks and IFAs want ETFs either directly, or packaged.

Michael Gruener described Blackrock’s purchase last year of Future Adviser which valued the business at up to $200m.

Shaun Port said that 50% of Nutmeg’s clients were new to investing, and had an average age of 40; however, he declined to reveal how many of them there were, or how much it cost to attract them.

The panel agreed that ETFs were disruptors in the asset management space in their own right quoted Vanguard’s claim to offer ‘holistic solutions for investors’.

There was a question as to whether clients want to be educated in investment, or whether they just want a simple, low cost option that delivers the outcome they want; there is nothing like robo at its price point.

The mid-afternoon panel session looked at the ways in which traditional players such as Nationwide – the world’s biggest building society – Lloyds Bank and Saxo are integrating elements of the new technology.

Andra Sonea said that 50% of Lloyds’ transactions were online with a large number mobile only; Chris Williams said that Nationwide has clients with different needs at different times.

Later sessions went on to consider the regulatory environment in which robo must establish itself and we ended with a vision of the wider FinTech revolution – ‘disruption, innovation and opportunity’.

This brought the curtain down on a day that was both absorbing and thought-provoking.

With so many people deprived of financial advice, there should be demand for low cost, simple automated advice.

There should be little to fear in terms of the investment performance from the current crop of platforms, in the main they are either based on model portfolios of ETFs or on Model Portfolio Theory itself, which is fully 65 years old and a mainstay of the traditional advice space.

The elephant that was oft-referenced in the room, but remains to be solved is that of customer engagement and acquisition; apocryphally, one of the newbie US platforms declared its ambition to be the Charles Schwab  in the robo space at which point Charles Schwab flexed its not inconsiderable muscles, launching Intelligent Portfolios and attracting $5.3b in its first year.

Perhaps it needs a few more of the slumbering giants in the space to leverage their tremendous reach, but there also appears to be great potential for new entrants that are able to chime with a particular user group.

What is sure is that this is an industry that has massive potential and one that will undoubtedly encounter some twists and turns along the way.

DIY Investor will maintain a keen interest as there will be choices for investors to make in terms of the platform they plump for with variables in terms of underlying investments, pricing and outcomes; if robo-advisers encourage more people to save or invest for their future, that is entirely harmonious with our ambitions particularly, as seems to be the case, robo-advice exists alongside other forms of investment rather than usurping them.